If you know me personally, then there are two facts about me that are no secret. The first is that I'm a big fan of the Unpopular Opinion podcast network. The second is that a love Reese's Peanut Butter Cups (to the level where my lovely girlfriend spoiled me with a basket full of Reese products for Valentine's day). These two loves happened to cross-over around Halloween when an episode of Unpop's List! Cast! program went up polling on the worst Halloween treats of all time. Obviously Reese's were not on that list, but the hosts did posit their favourite Halloween treats as an aside and it was basically unanimously agreed that Reese's would take the crown if they put it to a vote. This, of course, got me thinking about just which Reese's product is the best of the best and I quickly realized that I could make a Top 10 just off the top of my head if I wanted to. But why stop there? Why not just list every Reese product I've tried in order from best to worst?

For this list, I'm going through the list of Reese's products on Wikipedia and including a couple other products which aren't on the list. Obviously I haven't been keeping a list of all the stuff I've tried through my life so I might have forgotten products if they're not on that list, but this will help jog the memory. I mean, hell, just slap a Reese's logo on your product and you've already piqued my interest, so I've got a ton of material to draw from.

Also, I'm going to exclude the original Peanut Butter Cups from this list. They're just classic, and more than stand on their own.

Reese Mix - These things are a bloody insult, simply from an economic perspective. I'll try many Reese's products, but these are the only one that has tempted me multiple times, but I just can't get over how much they try to charge you for a small package of Minis, Pieces, peanuts and pretzel bites. The worst part is that for $20 you could buy up all the ingredients separately and make your own Mix cheaper than it would cost for an equivalent "official" packaging. Most Reese's products can justify themselves because you're never going to be able to replicate that perfect taste yourself, but Reese Mix is so unnecessary by junk food standards that I can't even bring myself to pay for one.

World's Largest & Half-Pound Cup - These two products are just gimmicks. I mean, I'm already demonstrating how much I love Reese's products, but c'mon, that's too much chocolate. No one actually eats these things... right? I mean, not by themselves? These are meant for sharing? Like, maybe once on a dare, but never as a regular purchase...? I'm going to just leave it at that before I have an existential crisis.

MegaLoad Bars - These aren't technically Reese's products, but I feel like they're a curiosity that should be mentioned. I've encountered these things in a couple gas stations up here in Canada and while they look amazing, they've never been nearly as good as they look. They're decent and worth the occasional purchase as a curiosity, but could certainly be improved if they actually were using Reese's products instead of generic knock-offs.

Alright, with that out of the way, let's get into the countdown...

Welcome back to the final entry in the Jurassic Park retrospective! In this entry we we will be looking at the latest film in the franchise, Jurassic World. After years of false starts, could the Jurassic Park franchise rejuvenate itself for a new audience? Read on to find out... 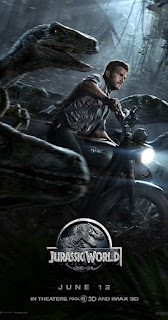 There was a more "traditional" Jurassic Park poster, but this was probably the big one and demonstrates how the franchise's marketing has shifted in the 14 years since Jurassic Park III.

Following the release of Jurassic Park III, the franchise entered a protracted state of development hell. Spielberg and Johnston hinted at a number of ideas that they had for sequels, including pteranodons attacking the mainland as hinted at the ending of Jurassic Park III. However, development seemed to shift away from following-up on Jurassic Park III's loose threads and onto other ideas. One of the first which seemed to gain traction involved the dinosaurs spreading uncontrollably, with Sam Neill, Jeff Goldblum and Richard Attenborough reprising their roles and the lovely Keira Knightley being rumoured to play a grown up Lex Murphy. Stan Winston's studio moved forward with special effects planning, filming locations were scheduled and actors were signed on, and it seemed like Jurassic Park IV was underway.

However, not all was well on the project. A script couldn't be agreed on, perhaps because the central premise was bonkers - pretty much every story that they came up with revolved around some sort of genetically modified dinosaurs being used as mercenaries and wielding guns. Drew McWeeny, who saw an early version of the script, probably said described the situation the best: "I think it’s well-written and certainly inventive, but I also think it just might be the single most bugfuck crazy franchise sequel I’ve ever read, and I’m not sure we’re ever going to see this thing onscreen. It just doesn’t seem possible that Universal would make something this vigorously whacked out." Suffice to say, the film continued to have issues putting together an acceptable script and its production dragged on longer and longer. Years after the fact, concept art from this time in the film's development leaked online, which featured a variety of ass-ugly dino hybrids. 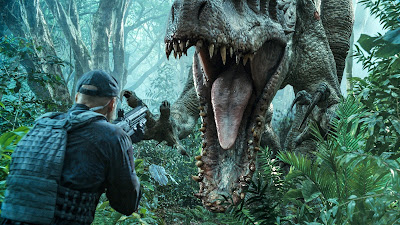 Between 2006-2008, a variety of stories, scripts and filming rumours were bounced back and forth, but still nothing was materializing. Then, on November 4, 2008, Michael Crichton passed away and it seemed like the general consensus was that the franchise should die as well. However, rumours surrounding a fourth film persisted regardless, with Johnston stating in 2010 that there were plans in place for another trilogy.

Welcome back to part three of the Jurassic Park retrospective! In this post, we'll be diving into 2001's Jurassic Park III. After the muted reaction to The Lost World and Spielberg's decision to step away from the series, would a new director inject fresh life into the franchise? Read on to find out... 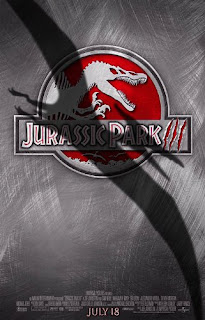 After The Lost World, Spielberg was ready to step away from directing the franchise and instead went on to produce. Joe Johnston instead was brought on to direct after having offered to direct the previous entry. Johnston would later go on to be well-known for The Wolfman and Captain America: The First Avenger, but at the time he was already famous for making quality family-friendly, special effects-heavy blockbusters such as Honey, I Shrunk the Kids, Jumanji and The Rocketeer. Without a novel to form the basis of the plot, a new story had to be written from scratch for the first time in the series history. The first draft of the script revolved around teenagers getting stranded on Isla Sorna, but this was ultimately rejected when Johnston was officially brought on board. The second script revolved around Pteranodon escaping from Isla Sorna and killing people on the mainland and featured a number of characters which would make it into the final film, including Alan Grant and Billy Brennan. This script would have had two main plots - one with Grant and company crashing on Isla Sorna, and another investigating the attacks on the mainland. Production went underway for this version of the script, with sets, costumes and props built to support it. While it was not based on any previous works, some action sequences were inspired by scenes from the novel versions of Jurassic Park and The Lost World, such as the aviary and the spinosaur attack on the river.

However, in an Alien 3-style turn of events, the script was rejected by Johnston and Spielberg only 5 weeks before filming was scheduled to begin, with $18 million already poured into the production and a series of sets which now needed to be worked into a non-existent story somehow. The parallel plotlines were deemed too complicated and the film was ultimately truncated into a single rescue mission plotline, with a script getting rushed to meet the filming schedule. A final script was never actually completed during the production, which is never a good thing to hear (although some films, such as Iron Man, prove that this can still work out in the end).

Welcome back to the Jurassic Park retrospective! In this entry we're going to be looking at the second film in the franchise, 1997's The Lost World: Jurassic Park. After the first film set box office records and captivated the imaginations of audiences everywhere, a sequel was practically guaranteed. Could Spielberg and company recapture the same magic which made the original film so special? Read on to find out... 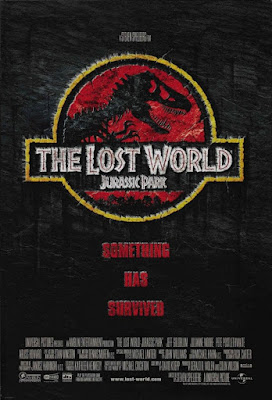 As I said in the previous entry, The Lost World: Jurassic Park apes the original film's poster hard, only really differentiating itself with rougher, decayed design and a cool tagline.

After the success of the first novel and film, Michael Crichton was pressured to write a sequel. Most fans (myself included at the time) had expected the sequel to involve Nedry's embryo canister in some way, and even Spielberg explored this option, although it was ultimately dropped and never explored outside of the Jurassic Park Telltale game. After discussions with Spielberg and others, Crichton eventually relented when he got an idea for a sequel, which would be published in 1995 under the name The Lost World. However, by the time the novel was nearing publication, Spielberg was uncertain if he was going to return to direct, with Joe Johnston (who would eventually direct Jurassic Park III) offering to take his place. Shortly after The Lost World was published, Spielberg announced he would direct the film, although with some reluctance.

The Lost World novel was... not great, to say the least. It's pretty clear that Crichton's heart wasn't truly in it, and the plot definitely suffers for it. The story of the novel revolves around Ian Malcolm hunting down a scientist who is stuck on Isla Sorna while Lewis Dodgson (the guy who Denis Nedry betrays John Hammond for in the original book and film) attempts to capture dinosaurs at the same time. Lots of mindless dinosaur-based carnage ensues. The film wisely discards most of this plot set-up, retaining only the most skeletal bits of it, most notably the idea of a "site B" where the dinosaurs were bred in secret in their own ecosystem. Perhaps notably, Crichton was not involved in the writing of the sequel. Other than that, the film also features a sequence from the novel where t-rexes knock a vehicle off of a cliff, which ended up being the standout moment of the film. The Lost World also features a number of sequences inspired by the first novel, including the opening beach attack, a character being swarmed and killed by procompsognathus, and a t-rex attacking characters hiding behind a waterfall.
Read more »
Posted by Barloq133 at 12:30 No comments: