Death Note is Kind of Trash

I wasn't really into anime when I was growing up. I watched localized successes like Sailor Moon, Pokemon and Yu-Gi-Oh! and checked out an issue of Shonen Jump once, but in general I was turned off of anime and manga by obsessive weebs. However, in the last few years I've been trying to get more cultured and have been checking out some of the big names in anime. One of these big names that I was sure I would like is Death Note. I mean, the whole premise it's right up my alley: a notebook which kills anyone whose name is written in it? A cat and mouse game between the holder of the book and the detective hunting him down? A creepy demon monster following the protagonist around? Sign me the hell up. Hell, I was so certain that I was going to enjoy Death Note that I picked up the Blu-Ray set so I could enjoy it all at my leisure. I don't tend to buy Blu-Rays blindly, but when I do it tends to work out splendidly for me (see: John Wick, The Raid, The Conjuring, etc). It has probably been two years since then and over the course of a few days I finally decided to sit down and watch Death Note in its entirety. 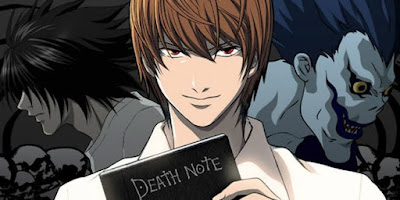 ...and it kind of sucks. Like, I kind of want to just give away my Blu-Ray copy now, I disliked it that much.

It's actually was surprising for me. I've heard a lot of good things about Death Note, some people going so far as to say that it's one of the absolute best animes, so figured it would be a slam-dunk for me. Don't get me wrong - the first 10ish episodes are quite enthralling as Light learns how to use the Death Note, L tries to discover Kira's identity, and Light tries (poorly) to cover his tracks. However, it quickly starts to go down hill with only occasional moments of excitement. Hell, my disappointment was so surprising to me that I had to look up other reactions to the series to see if I was totally alone in my assessment. From what I've seen, most fans of Death Note will admit that the series drops in quality around episode 25 (some even agreed with me, that around episodes 10-15, the series' quality definitely begins to decline). Considering that Death Note is a 37 episode-long anime, even if you think it's good overall it seems like the popular opinion is that ~1/3 of the series is not great. And, if you agree with me that the series drops off quickly, it's closer to 2/3 of the episodes being pretty shitty. Again, considering this has a good reputation, I feel like I need to explain exactly why I disliked it so much. And, in case it isn't obvious, spoilers incoming.