This happens to be my 200th post on I Choose to Stand, and I've put together something special... After all the shit-talking I've done about Dead or Alive Xtreme 3, I thought that it was pretty unfair of me to just dismiss it off-hand. As a result, I picked up a copy of the PS Vita version (like hell I was going to get caught playing this on my TV) and set about writing this review. Is it as bad as I had predicted? Read on to find out... 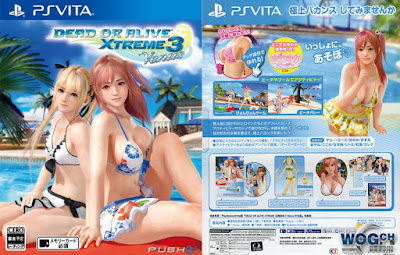 Note that the game is very careful to highlight that you can use the touch controls to manually jiggle the girls' boobs. Stay classy Tecmo, stay classy...

DOAX3 is a... umm... well, it's pretty hard to place it within a genre really. The most succinct way to describe it is that it's a minigame collection based around a voyeuristic appreciation of sexiness, with some very basic happiness-management and dating sim elements layered over it. The first thing that really struck me about DOAX3 was just how similar it felt to previous DOAX games - I had previously played a little Dead or Alive: Paradise, but even that cursory glance was enough to notice that DOAX3 has basically the exact same menu-based user interface and layout. Hell, even the locations are the basically the same, and the thumbnails look very similar too (the Sports Shop in particular looked almost identical to me). The game is also clearly carrying over a number of art assets from Dead or Alive 5: Last Round - the characters themselves appear to be updated, but the swimsuits and even some of the environments have been very clearly shared between the two releases (and the bulk of the "new" swimsuits are just palette-swaps).

Perhaps most egregiously, I also noticed that a very significant portion of the game's gravure videos are lifted from previous games in the franchise, reusing the exact same animations and even camera angles. I didn't do a comprehensive count, but when cross-referencing Hitomi's scenes in Dead or Alive: Paradise, I noticed that quite a few were reused wholesale, such as her riding on inflatable orca in the pool, her very cute improvised dance session, eating an ice cream cone and going for a bike ride. They also directly lifted Hitomi's Private Paradise scene from Dead or Alive 5: Ultimate's DLC. I'm sure there are more of Hitomi's scenes reused that I just haven't encountered in DOAX3 yet, and the fact that I've found this much recycling for just a single character is kind of a demonstration of how little effort seems to have gone into differentiating DOAX3 from previous games in the franchise. I don't want to accuse Team Ninja of being lazy, but the sheer amount of recycled content makes me feel like they basically just put in a minimal amount of effort on this release - hell, they couldn't even expand the cast past 9 girls, possibly because this would have required them to add in more items for the dating sim elements.

Controversially, DOAX3 also removed some features from previous DOAX games - in particular, the Marine Race (aka, Jet Skiing) and Water Slide have been removed entirely, presumably because the marina has been excised from the game (for no apparent reason other than lack of effort). The cast of characters is also kind of disappointing. Series mainstays, such as Christie, Tina and Lei Fang have been replaced with DLC characters from DOA5. I know that they put this up to a popular vote, but the fact that some of the main characters of the series have been excluded and have been replaced with people that we don't have any sort of story context for makes the game feel significantly less true to the DOA name (naturally, the two highest-voted new characters in the poll were the two biggest fetish bait - the lolita schoolgirl, Marie Rose, and the biggest tits and ass in the franchise, Honoka). 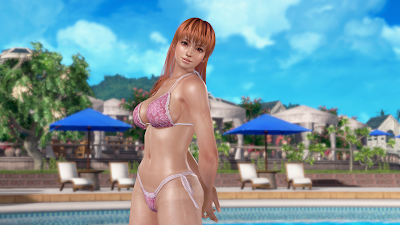