Let the Past Die

Solo: A Star Wars Story is out this week and for the first time since 2008's Clone Wars animated movie, it seems like Star Wars fans could just not give a shit. Some of this can come down to the divisive reaction to The Last Jedi - for my part, I really liked it and feel like it will be looked upon very fondly in the future, but the fury with which many people have derided it makes any sort of dialogue on it very tiring. Some of the antipathy can also come down to the perception that, at least anecdotally, no one really seems to want a Han Solo origin film, nor do they really want Star Wars spin-off films. I also feel like Disney's annualizing of the Star Wars franchise is dangerous to the franchise's long-term health. Star Wars used to be a big event every 3 years (or more!), but we now are getting a new one every year. It's hard to say that that doesn't dampen the hype somewhat and if this is going to continue indefinitely, then who knows whether the franchise's popularity will burn out in time.

Now, to be fair, this is probably all down to perception - Solo is still expected to break records (EDIT: well so much for that) (ANOTHER EDIT: OH SHIT**), which suggests that your average Star Wars fan is part of that silent majority who don't participate in public dialogue. Similarly, I unfortunately can't find the link anymore but I saw a poll on starwars.com recently where The Last Jedi was actually voted 2nd best in the series after Empire, followed thereafter by Revenge of the Sith (!!!), suggesting that the popular opinion is actually way more favourable to The Last Jedi that the Internet would have you believe (on a similar note, I'm not surprised that Revenge of the Sith is so well-regarded either, since it would be seen as the big, epic culmination of the series for many people when they were growing up). 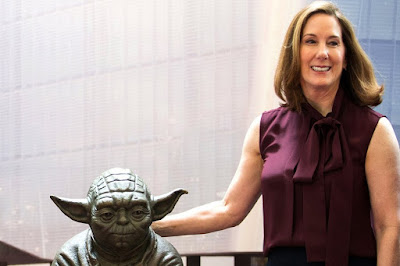 I've been wanting to write about Star Wars and The Last Jedi for quite a while now, but what finally prompted me to write up a post was this rallying cry I'm seeing in the, shall we say, dark side of the fandom which calls for Disney to fire executive producer Kathleen Kennedy. This, to me, is just such a strange situation. I mean, how many executive producers get blamed for franchise woes? Hell, how many could your average movie fan be even expected to name? I mean, Steven Spielberg doesn't get shit for Transformers, nor does Christopher Nolan get shit for the DCEU. So what is the difference here?