Five Finger Death Punch and the Machismo of Submission

For the past couple months I've been working on a follow-up to my album rankings of 2017 and one of the bands that is going to feature on that list is (spoiler alert) Five Finger Death Punch. I have really disliked Five Finger Death Punch since I first checked them out - they tend to have a few good songs per album but most of their music is utter trash. The main issue is their lyrics, which are usually toxically masculine, raging at the whole world, threatening to beat everyone up, swearing constantly, and which throw in casual misogyny and homophobia for good measure. For a band that is clearly aiming to be badass, their incessant whining makes them look like a bunch of children and this has turned me off of all but a handful of their songs.

For this year's album rankings though I decided to look into Five Finger Death Punch a little bit closer though to see if my impression of the band was accurate. For the most part, yes I was pretty spot on. Most distressingly, the band's nasty, misogynistic lyrics spill over into real life; lead singer Ivan Moody (seriously, that's his actual last name) has been in legal trouble on at least two occasions for assault against women, in part due to alcoholism which he has apparently been trying to get a handle on. One thing you kind of have to give the band some credit on though is their unequivocal support of the military and police. The level to which this support goes might be questionable, but the respect that they show to the actual individuals is admirable and has likely contributed to the growth in their popularity. 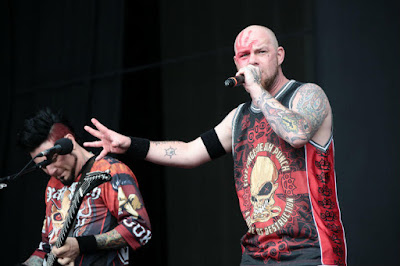 Most of the band doesn't seem to be openly political, with the major exception being guitarist Zoltan Bathory who has, err, opinions on Donald Trump, gun control and communism. He seems like a really odd character all on his own. In addition to Five Finger Death Punch, he claims to be a civilian combat instructor for the US military, although I feel like I need to add that I've seen comments from multiple soldiers while researching him who said that they had never heard of him and that they were skeptical of his claims. Considering that the article cited on his Wikipedia page which is meant to back up this claim also has Bathory claiming that the band has been shot at while performing for the troops in Iraq and Kuwait, I'm also somewhat skeptical (I certainly don't doubt that he's a skilled martial artist, but "one of the few civilians certified by the US Army as an L1 Modern Army Combatives Instructor – Close Quarter Combat"? Sorry Zoltan, I need a bit more proof than your word).

Zoltan also apparently writes for a magazine called Skillset. Skillset's website states quite boldly that it's all about "redefining the alpha lifestyle", with features that "[spotlight] men and women with undeniable talents and abilities. We are VETERAN OWNED AND OPERATED and changing the face of 'men's interest' magazines on newsstands." The magazine boasts that it does so through articles on "rock stars, athletes, car builders and gun culture" and is plastered with ridiculously over-the-top images of men pointing guns at the camera. Basically it's a douchey, redneck version of Playboy. Not all that surprising that a member of Five Finger Death Punch would be drawn to such a publication, although it sounds less like they're "redefining" the alpha lifestyle than they are simply reinforcing traditional American machismo, although perhaps with some consideration that women can be badass too.

Finding out that Zoltan writes for Skillset really helped to crystalize my disparate feelings about Five Finger Death Punch, because I feel like it really is a great, unintentional illustration of the band's philosophy. One could say that Skillset is all about people who are apparently better than the rest of us because they take control, the ways they present themselves, etc. Similarly, Five Finger Death Punch's music is all about aggressive posturing, the constant threats about kicking peoples' asses are meant to make them seem like badasses even though they end up making them seem like whiny, overcompensating pansies. This is just so obvious on songs like "Burn MF" where they unironically claim that the weight of the world is on their shoulders and then in the next verse rage that people fake that the world is on their shoulders. I'm not the only one who notices this either; in a review of their most recent album Michael Hann writes that Ivan Moody "reflects on his troubled past couple of years [...] with a level of self-pity that wouldn’t disgrace a child who’d been bought Pro Evo instead of Fifa for Christmas: 'Everybody seems like they’re waiting for me to die / Talk shit behind my back, can’t look me in the eye.' When, on 'It Doesn’t Matter', he hollers 'You’re so self-righteous, and you’re never going to change,' you want to inquire if Mr Pot and Mr Kettle have made each other’s acquaintance." It's like they see the world in a hierarchical way, where their troubles are more legitimate than those of the people beneath them, in a manner not dissimilar to incels with their self-perception of being "inferior" beta males who are literally unloveable and worthless.

Hey everyone, I am pleased to announce that I became a father on the 29th of October! This is super exciting, but if my writing schedule becomes more inconsistent, that's my excuse. I've actually got a lot of content underway, some of which will definitely be done by the end of the year, but I'm just a bit crunched for time as you can probably understand.

Anyway, with the midterm elections now on the books and the Democrats thankfully winning Congress, hopefully the signs are pointing towards this global fascist nightmare finally losing momentum. All of the voting talk was making me think about my many articles about voting and how I kind of wish that people had to earn the right to vote (if there was a way to make that notion not totally evil). Upon some reflection after seeing the midterm campaigns unfold, I occurs to me that this idea doesn't really fit into the modern American democratic process very well (let alone the Canadian one). Part of the problem is the pervasiveness of fake news and propaganda on hyper-partisan media. If the truth wasn't being actively obscured by malicious agents that would be one thing, but when we have one side skewing the truth so much that its adherents are basically living in an entirely different world, that makes them have a false sense of confidence that they know what the issues really are that they're voting for. Plus, these malicious influencers are driving people to vote through outrage, meaning that the parties are incentivized to be political scum in order to have a chance to win. It's just a race to the bottom due to the way that the system is set up.

But... what if it didn't have to be that way? I saw the following Tweet while browsing voting threads and I found its argument extremely interesting:

Aussie here: one thing that is oft repeated by Australian commentators on the USA is that because USA lacks mandatory voting the Republicans must rely on churches to get people to vote. Which is why your Conservative party is a lot more right wing tha ours.
— A.Z.M.B (@Voodooqueen126) November 4, 2018