A year and a half ago, I took a trip off the usual content that shows up on this blog and made a list of the best Reese's products. Since that was published, I have come across quite a few new Reese's products which have been making me want to do an update. Now that we're a fair ways out from that initial list, I'd say it's finally time to add in all the new products I've tried in the past year and a half. I'll probably update the list again in future, depending on how many new products I try and how long has passed since the last list.

As before, I'm not exclusively going over official Reese's products, but any exceptions are done at my discretion. I've also once again excluded the original Peanut Butter Cups from the list, because they're just timeless and the default (and therefore would just end up on the lower half of the list for being less interesting).

29) Reese Mix - These things got a dishonourable mention in the original list because they're way too expensive for what you get so I could never bring myself to buy them. However, my fiance knows I like to try new Reese products and hadn't seen one of these before so she bought it for me. Turns out that these are kind of worse than I expected. I mean, it's just the sum of its parts - peanuts, pretzel, Pieces and Minis, but the pretzel bits are really salty. On the one hand, this just makes you want to eat the Minis more to counter-act the salty taste, but it's a pretty bad look when your snack food is actively making me want to ignore parts of it to get to the bits I like. Plus, the saltiness passes over to everything else in the package anyway. All-in-all, it's not the ideal way of eating any of the ingredients and I'm 100% certain you could make your own Reese Mix that would not only taste better but be cheaper overall. These things are just all-round failures as far as I'm concerned. 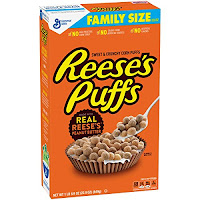 28) Puffs - Reese Puffs are the KFC Double Down of the breakfast cereal world: breakfast cereals are already towing a fine line trying to justify themselves as something other than sugary junk food, but Puffs just shit all over that line and head into something that's just disgusting. I mean, the tag line when I was a kid was that they're "Reese, for breakfast!" Yeah, uh, no thanks. I mean, I like Coca-Cola, but I don't want one before noon at the earliest. Fruit Loops and Lucky Charms at least pretended like they weren't sugar in a bowl, but Reese Puffs don't even put up a pretense about what this product is. I had these maybe once as a kid, and even then I was not taken in. Of all the things on this list, if I had to sacrifice one Reese product for the good of humanity, this is the one I'd cast into the fire. 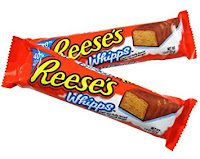 27) Whipps - I swear that I tried one of these things when I was a kid, but I can't remember it at all, it didn't leave any sort of impression on me. I don't recall it being bad, but there's basically nothing else on this list that I wouldn't rather have instead (y'know, aside from Reese Puffs and Miniatures). I'd probably buy one just for the memories if I saw one, but it isn't a particularly interesting choice.

26) Reese Bar - I've had these things a few times, but I've never been particularly impressed. Maybe it's just me, but these things are just too big and push over the limit where you're getting "too much" sweetness. Plus they don't hold together very well. I always find that if you try to break pieces off of the bar it caves in on itself and the peanut butter filling is very soft. They're certainly edible, but I never buy them as anything more than a curiosity.